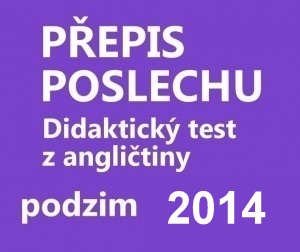 A: Cate, what about the birthday present for your mother?

B: Oh, Andy. I really couldn’t decide what to give her. I wanted to make a cake for her but my cooking is terrible. Then I had a great idea. She likes Dan Bryan’s novels so I decided to buy her his new book. But when I went to the shops I couldn’t find it anywhere. The book is so popular. All the copies were sold. In the end, I bought her some really lovely flowers. She was very pleased, so it was the right present after all. And you know what? She got the book by Dan Bryan from my dad.

A: Cristine, are you ready?

B: I don’t know Paul, you know I don’t like heights. I’m even afraid of being on a mountain.

A: Trust me. Parachute jumping is safer than mountain climbing. All you need to do is relax. Think of it like flying in a balloon, but much faster and downward. That’s easy for you to say, you have done lots of bungee and parachute jumps. So you’re used to falling from high places. But I have never even fallen of a ladder. I’m not sure I want to experience a fall from 4,000 metres.

B: But the view is amazing from up there. Look, we have to meet a pilot in an hour. Let’s go.

Hi, Caty. It’s Jenny. Listen. Yesterday I finally met the guy from the internet dating site face to face. I’ve just sent you a photo of us taken in a bar. His name’s Terry and he’s younger than me. But as he’s grown a beard, he looks older. At work, he always wears glasses. But he didn’t have them in the bar. Would you believe he used to have long hair? But fortunately, he decided to have it cut a month ago. He’s as tall as me, but thanks to the shoes with high heels I wore that evening, I was taller than him, huh.

A: So Jim, what shall we do after school next Wednesday?

A: But remember Jim, we have that special orchestra practice at 7. Is there anything we can do earlier?

B: We can go swimming if you want. I haven’t done that for ages.

A: Oh, but wait, the orchestra practice is on Thursday, not Wednesday. Do you want to see that comedy after all?

B: Yes, all right. Where shall we meet?

B: Karen? Is that you? When did you return to the USA? I heard that you’d been teaching English for 10 years all over Asia.

A: Actually, I taught there for 15 years. Yes, I just moved back only three weeks ago. My husband and I decided to return home so we could be closer to our families. My husband’s mother has serious health problems so he wants to be close by.

B: I’ve always dreamt of living in a foreign country. Tell me, how did it happen? What made you decide to go abroad?

A: Ah, it wasn’t exactly my choice. My husband was transferred to Japan by his company right after we’d married. I just graduated from university with a teaching degree, I had neither work nor experience before leaving.

A: I thought that with my university education I could easily find a job as an English teacher. But it was a big mistake. See, you need a special certificate to teach English abroad.

A: I had to find a course to get this special certificate. I was even teaching illegally for a while. But after I had completed the course and got the certificate I quickly found a well-paid job without any difficulty. I spend the next 8 years teaching students from the ages of 8 to 15 in special after school programmes called Cram Schools. They’re basically intensive one-month courses in English where students learn in one month what usually takes three months to learn.

B: What did you like the most about teaching in Asia?

A: The young Asian students. It was wonderful to work with such motivated kids. Such a difference from American students. It’s the culture. Asian culture places a high value on education. The children are very well behaved and respect the adults in a way I’d never seen before. American students could really learn from their example in attitude.

B: What did you do next?

A: Two years ago, my husband took a job with a government. So I had to move around a lot. The China, South Korea, Vietnam and other Asian countries. I taught English in all of them, to teenagers and adults too. But I have to say, teaching adults in language schools after work is terribly difficult for me. They’re tired and sleepy. And what’s more, every student in the group needs to learn something different for their jobs.

B: Wow, what an incredible experience.

The Brooklyn Bridge across the East River connects Manhattan with Brooklyn in New York City. It is one of the oldest suspension brides in the United States. Its construction started in 1861 and took 14 and a half years. The construction involved 600 workers and 15 and a half million Dollars were spent on it. The Brooklyn Bridge was designed by John Roebling. He was a German immigrant and spelled his name R O E B L I N G. In Europe, he had worked for the Prussian government as a bridge builder. But when he arrived in the USA, at the age of 25, he worked as a farmer. He wasn’t very successful at doing that. He got the idea of building a bridge across the East River, during the cold winter of 1866 after he had taken a ferry across the river. However, John Roebling never saw the bridge he’d designed. He died on 22nd July, 1869 after he had badly hurt his foot in an accident. However, he wasn’t the only one to loose his life during construction. 27 of the total 600 workers died while working on the bridge. They died because they injured their lungs or head when they’re building the underwater parts of the bridge. After John Roebling’s death, his son finished the project. He had worked for his father on several bridges before and had helped design the Brooklyn bridge. The Brooklyn Bridge was opened on 24th May, 1883. The opening ceremony was visited by president Chester A. Arthur and the governor of New York. Several thousand people attended the event. To make sure the bridge was safe enough to cross, at first, elephants from the famous circus were sent ta walk over the bridge. But even after the opening of the bridge a lot of New Yorkers were afraid it would collapse into the river.

A: Listen, Steven. You’re an intelligent young man but you have to make some changes or you’re going to fail my class. Don’t laugh because it’s not funny. It isn’t a joke. When I give you homework, I want you to do it. After all, it’s a preparation for your interview exam. The questions on that test are going to come straight from the exercises you do in class, and home, so if you don’t do them, you’re certainly not going to pass the exam. But, it’s not too late to do better, Steven. Not only in your next class, I don’t want you to be late.

A: So, have you read David Frederick’s latest book?

B: Yeah, I finished it yesterday. But I wasn’t really impressed.

B: Well, I’ve always loved his stories because of the places the author shows. I van close my eyes and imagine myself there. In his new book, well, he describes these beautiful places and then he introduces the people. They’re great and have amazing personalities and lives, but their dialogues sound so stupid. The people just speak like robots. It damages what’s an interesting story. The dialogues in his previous book were wonderful but he really disappointed me with his newest book.

A: So, Justin. Now that your girlfriend is studying in London, how often do you see each other?

B: Well, I’d like to see her everyday but unfortunately, it’s not possible. London is just too far away. At least we call each other every day.

A: Yeah, but when do you get a chance to actually see her?

B: When she started university, I used to see her about once a week. But it’s too expensive to travel to London every week. She’s a student, so she can’t afford to travel here. Ans I just don’t have money to go there every weekend. So I see her once a month, usually on the last Saturday or Sunday.

A: Jim, I’ve got two tickets to the boys band concert tomorrow night and Allan’s busy at work. Would you like to go? You needn’t pay for the ticket, I just don’t want to go alone.

B: The boys band? Are they the jazz band from the USA?

B: Well you don’t like classical music so they can’t be a classical group and you’re not into pop either.

A: No, definitely not. You’re right. They’re rock band from Finland, but the singer used to play classical music.