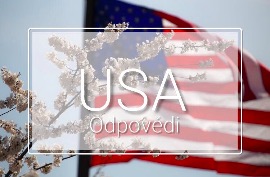 1. Where in the world map do you find the USA? Tell me about it.

The United States of America is located on the continent of North America. The USA is the fourth largest country in the world. There is the Pacific Ocean to the west, and the Atlantic Ocean to the east.

2. Is the USA a bigger or a smaller country? Tell me about it.

3. How many united states make the USA? Tell me about it.

There are 50 states that make the USA. 48 of them are located in central North America, and then Alaska is in the north-western part of NA, and Hawaii is in the Pacific, west of California.

4. Who are the neighbouring countries of the USA? Tell me about it.

The United States shares borders with Canada in the north and with Mexico in the south. The border with Canada is the world’s longest land border (between two countries).

5. What is the largest city in the USA and which one is the capital city? Tell me about it.

The largest city by population in the USA is New York City. The city that never sleeps has a population of over 8 million people. The capital city is Washington D.C., which is in the east of the USA.

6. Who are the people of the USA and what is their origin? Tell me about it.

7. Which state from the USA do you think is the most exotic? Tell me about it.

The most exotic state is Hawaii. It is a state that is composed of 8 islands. It is well-known for its beautiful beaches with white sand, and also, two of the world’s most active volcanoes are in Hawaii.

8. Who are the original people of the USA? Tell me about them.

The original people of the USA are American Indians. They came to America thousands of years ago from Asia. They lived in tents in summer, and in snow houses in winter. They made their clothes from animal skins and used feathers to decorate their heads. Now, there are still more than 500 tribes, living in the reservations in the USA.

The head of the United States is the president, currently Donald Trump. He is the 45th president, he won the election in 2017. Donald Trump is a Republican. He is a bit controversial because some of his actions have been seen as racist or sexist.

10. What is the traditional food in the USA? Tell me about it.

Any type of fast food can be seen as American traditional food. Barbecue, hamburgers, hotdogs, apple pie, steak- those are all favorites in the USA. Also, Thanksgiving turkey is very traditional. American kids favorites are peanut butter and jelly sandwich, s’mores, and mac and cheese.

11. Is the American English the same as the British English? Tell me about it.

American and British English are very similar. But there are also many differences. Sometimes the spelling is different, for example, colour X color, favourite X favorite, humour X humor. But in some cases, the words are different as well, for example, trainers X sneakers, jumper X sweater, lift X elevator. If you hear the language, it is quite easy to know if it’s American or British, by the accent.

12. What are the symbols of the USA? Tell me about it.

13. Which historical event do you consider the most important for the USA? Why? Tell me about it.

There are several important historical events. Here are some examples.

14. Is there anything special about the US movie making? Tell me about it.

The US cinema is often called Hollywood. Hollywood represents the oldest film industry in the world. Many genres were born there, such as comedy, action, musicals, horror, science fiction, or drama.

Yes, the USA is a world superpower. They have a dominant military (largest Air Force and Navy in the world), the world’s largest economy, hundreds of overseas bases, home of the United Nations, nuclear weapons, large area, and many more.

16. Do you know any world-famous Americans? Tell me about it.

17. Which natural monument do you think is the most famous in the world? Why?

Probably, the most famous natural monument in the US is the Grand Canyon. It is a 1.6 km deep canyon, formed by the erosion of the Colorado River over millions of years.

18. What do you think of the American patriotism? Tell me about it.

The United States of America is probably the most patriotic country in the world. Americans love their country and they believe it is the best country. It is common, to see American flags on most of the buildings, on clothes, in movies, etc. Americans also celebrate the 4th of July, which is probably the most patriotic holiday. I think that it is okay to be a little patriotic, but sometimes it is too extreme in the US.

19. Which sports are the most popular in the USA? Tell me about it.

Baseball, American football, and basketball. Americans play sports in high schools and they also have college teams. Sports, in general, are a huge part of American culture. The Super Bowl is the most popular game in the country. Baseball is considered to be the sport that shaped the nation.

20. What do you know about the American space program? Tell me about it.

NASA is known around the whole world. Most of the American space explorations were led by NASA, including the moon-landing of Apollo 11 in 1969.

Yes, I would like to go on a road trip around the US. I would take a car and a bunch of my friends, and travel from New York to California. It would be fun because we would stop anywhere we would like to, and drive through most of the states.

2. Which state of the USA do you like the most? Why?

I would have to go to every state, to pick my favorite. But just from where I have been and what I have seen, I would say California. There are beaches, it is warm all year long, and people are always in good mood.

3. Would you like to go surfing to California one day? Why? / Why not?

I have tried the indoor surfing once and it was pretty scary, so I don’t know how would I do in the real waves. Surfing takes time, so I think that if I would go to Cali for few months and only focus on surfing, it would be great.

5. Do you like the idea of American patriotism? Why? / Why not?

I like the idea of being proud of my country and be grateful for where I come from. But most of the Americans have never been to a different country. In my opinion, you need to see other countries and cultures, in order to be proud of your own country.