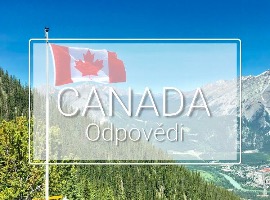 1. What is the location of Canada? Tell me about it.

Canada is located in the north of North America. Its southern border with the United States is the world’s longest bi-national border. It is the second largest country in the world.

2. Which countries does Canada have borders with? Tell me about it.

3. What is the climate like in Canada? Tell me about it.

Canada is known as the coldest nation in the world, but in fact, Canadians enjoy all 4 seasons. The average temperature of the whole country is -5.6°C. During the summer, temperatures can go up to 35°C, and in the winter it is common to go down to -25°C.

No, there are no penguins living in Canada. All of the 17 species of penguins are native to the southern hemisphere. People often think that they live only in cold climates and in Antartica- that’s a myth, they can live even on tropical islands.

5. What is the original population of Canada? Tell me about it.

The original inhabitants of Canada are called First Nations, Métis and Inuit peoples. They still make 5% of the national population. The Inuit people live in the north, Métis are mixed with Europeans and live mostly in western provinces and Ontario, and the First Nations people live south of the Arctic circle.

6. Is Canada the largest country in the world? Why? / Why not?

No, Canada is not the largest country in the world. The largest one is Russia, Canada comes second. Russia is almost twice the size of Canada.

7. What is the capital of Canada? Tell me about it.

The capital of Canada is Ottawa. It is the fourth-largest city in Canada. Almost half of the population is under the age of 35, which makes it one of the youngest cities in the country.

8. What is special about the region of Quebec? Tell me about it.

Quebec is the only province in Canada, that has mainly French-speaking population. French is also the official language there. Only 1.5% of the population speaks English.

9. Is Canada a densely populated country? Tell me about it.

10. What is the Canadian agriculture like? Tell me about it.

Canada belongs to one of the largest agricultural producers and exporters. They produce over 75% of the world’s maple syrup, and they are the world’s largest exporter of oats, wheat, flaxseed, and pulses.

11. Is Canada an independent country? Tell me about it.

Yes, Canada is an independent country. It is a federal parliamentary democracy and a constitutional monarchy. Queen Elizabeth II is the head of state, under the title “Queen of Canada”. She is represented by the Governor General of Canada- currently Julie Payette.

12. What are the symbols of Canada? Tell me about it.

13. Do you know any famous Canadians? Tell me about it.

14. What is special about the Great Lakes? Tell me about it.

The Great Lakes form the largest body of fresh water on the planet. They consist of 5 lakes, called Superior, Huron, Michigan, Ontario, and Erie.

15. Who is the executive head of Canada? Tell me about it.

The executive head of Canada is the Prime Minister. Currently, it is Justin Trudeau. He advises the Governor General of Canada, who represents the Queen. He is the head of government.

16. Which sports can be said to be national in Canada? Why? Tell me about it.

The most common and popular sport in Canada is ice-hockey. It is also Canada’s national winter sport. It began in the 19th century. Canadians see hockey as a unifying force. The National Hockey League (NHL) was founded in Canada, and it is considered to be one of the premier professional sports leagues.

17. Is Canada an industrial country? Why? / Why not? Tell me about it.

Canada is considered to be an industrial country. The service industry is very significant for Canada’s economy. That includes, for example, education, healthcare, and tourism. Also, the manufacturing industry belongs to the global leaders, with the production of aircraft, automobiles, and software.

Eskimo are the indigenous people who live in the Canadian Arctic. In Canada, they are called the Inuits. Eskimo means “eater of raw meat”. Nowadays, there are around 40,000 Inuit people living in Canada.

19. Which Canadian food is world famous? Tell me about it.

Most of the people probably think of maple syrup. Pancakes or French toast with maple syrup is one of the world’s most famous breakfasts. However, the national food of Canada is called poutine and it becomes more and more famous all around the world. It is gravy with cheese and fries.

20. What is „Nanook“? For which product is this word mainly used today? Tell me about it.

Nanook stands for a polar bear. It comes from the Inuit religion. In the Czech Republic, we use this word for a popsicle/ice-cream.

1. Have you ever seen a documentary about Canada? Why? / Why not?

I don’t think I have ever seen a documentary about Canada. But I have seen some documentaries about the Eskimos. Those are very interesting because they live completely different lives than we do.

2. Which place in Canada would you like to visit? Tell me about it.

I would like to visit Ottawa in the winter because there is the Rideau Canal and it becomes the world’s biggest ice skating ring! I would also like to visit Quebec and see the Chateau Frontenac. And then Niagara Falls for sure, as well as the Banff National Park, because of the breathtaking nature.

I would definitely like to spend some time with the Eskimos! Their culture is completely different, so is the language and the food. They hunt their own meat, live in the cold, and their lives and priorities just couldn’t be any more different than ours.

4. If you travelled to Canada, which means of transport would you choose? Why?

Well, it depends on where in Canada would I go. Each city has different options. There are cities with canals, where I could take a boat. Other cities have long railways or metros. If I could, I would probably take a car everywhere, because that is the easiest option.

It is not my favorite, because it is super sweet. But if I pour it on my pancakes or waffles, it is not that bad. I really like it in oatmeal or poured on ice-cream though.