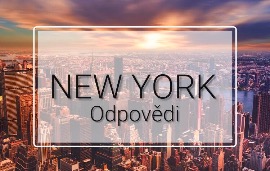 1. What is the difference between „New York“ and „New York City (NYC)“? Please, explain.

New York is the name of a state in the United States of America. New York City is a city located in New York. NYC consist of 5 boroughs: Manhattan, Brooklyn, Queens, The Bronx, and Staten Island.

2. Where does NYC lie? Tell me about it.

NYC is located in the north-east of the United States of America. It lies in the south of the state of New York.

3. Is NYC the biggest city in the US? Tell me about it.

NYC is the largest city in the US by population. More than 8 million people live there. There are about 800 languages spoken in NYC, which makes it the most linguistically diverse city in the whole world.

4. What is the original name of NYC? Why? Tell me about it.

New York was settled by the Dutch in 1624 and they called it “Nieuw Nederland”, which means New Netherland. The name was changed to New York to honor the Duke of York (King James II of England).

5. Which from the five boroughs in NYC are the most famous? Why? Tell me about it.

The 5 boroughs are Manhattan, Brooklyn, Queens, The Bronx, and Staten Island. The most famous one is probably Manhattan because most of the popular attractions are found there, such as the Empire State Building, the Rockefeller Center, the Times Square, Wall Street, etc.

6. What is the climate like in winter and summer in NYC? Tell me about it.

NYC enjoys the continental climate. The winters are cold and the summers are hot. The average temperature in winter is 0.5°C and 24.5°C in summer. Snowfall is common, usually around 60 cm per year.

7. Why is NYC such an extraordinary place? Tell me about it.

Most of the people have NYC on their bucket list. There is so much to do and see. It is very multicultural, more than 35% of people living in NYC were born abroad. It is the centre of fashion, art, music, and more. It is a city that never sleeps.

8. What are the symbols of NYC? Tell me about them.

9. What is Manhattan? Tell me about it.

Manhattan is one of the 5 boroughs of NYC, the most densely populated one. Most of the top attractions are found there (Empire State Building, Central Park, Times Square, One World Trade Center, etc.). It is also the economic and administrative center. United Nations headquarters can be found there.

10. What is the highest building in NYC? Tell me about it.

The highest building in NYC is the One World Trade Center. It is 541.3 m high, which is 1776 feet- that symbolizes the year that the US Declaration of Independence was signed.

11. What does the Statue of Liberty symbolize? Tell me about it.

The Statue of Liberty originally symbolized the friendship between France and the United States. But nowadays, it is seen as a universal symbol of freedom and democracy.

12. What is special about streets in NYC and which streets are famous? Tell me about it.

The streets in NYC run east-west and the ones that run north-south are called avenues. The most famous avenue is the 5th Avenue- it is one of the most expensive streets in the world. Other famous streets are for example Wall Street or Broadway.

Wall Street is the financial center. It is a symbol for the financial markets, such as the stock market, bond market, or the foreign exchange market. It is also the center of American capitalism.

14. What is special about Fifth Avenue? Tell me about it.

The Fifth Avenue is one of the world’s most expensive streets. There are stores like Louis Vuitton, Gucci, Versace, Prada, or Tiffany and Co. There are also museums, such as the National Academy Museum, or the Museum of the City of New York. The most famous one is the Metropolitan Museum of Art.

15. Which cultural places can you visit in NYC? Tell me about it.

One of the most famous cultural places is the Metropolitan Museum of Art (the Met), the Museum of Modern Arts (MoMA), or Broadway with many theaters and world-famous musicals, like Wicked, or the Phantom of the Opera.

16. What is special about bridges in NYC and which one is the most famous? Tell me about it.

Many of NYC’s bridges have broken or set records. For example, the Brooklyn Bridge and the Williamsburg Bridge were the world’s longest suspension bridges. The most famous one is definitely the Brooklyn Bridge- it connects Brooklyn and Manhattan. When it was completed, they had 21 elephants to walk over it to convince people how sturdy it was.

17. Where do people relax in NYC? Tell me about it.

The most famous place where to relax is Central Park. It is a huge park in Manhattan, with its size, it is even bigger than the state of Vatican. It is also one of the world’s most filmed locations. There are concerts, two ice skate rings, a zoo, a castle and more.

18. Which international institutions have their seat in NYC? Tell me about it.

One of the most important ones is the United Nations. Its headquarters is in NYC, they work in order to maintain peace and security.

On September 11th, 2001, also known as the 9/11, happened the biggest terrorist attack in the United States ever. Islamist extremists hijacked 4 planes and two of them flew into the Twin Towers (the highest buildings in NY). Almost 3,000 people were killed and over 6,000 injured.

20. What is the most favorite sports club in NYC? Tell me about it.

21. How do people travel in NYC? Tell me about it.

Most of the people in NYC use the subway. It is the seventh-busiest system in the world and the busiest in the US. The stations are located all over Manhattan, Queens, Brooklyn and The Bronx.

22. How can you get to NYC from Europe? Tell me about it.

You can go to NYC by plane. There are even flights from Prague now. The flight is about 9 hours long.

I would absolutely love to visit New York City. It has been on my bucket list ever since I can remember. I’ve seen in so many movies, I already feel like I’ve been there. I want to see the Empire State Building, go to Central Park, the Times Square and get Chinese food at 4 am! I just want to experience everything in the city that never sleeps!

2. Have you ever watched a film which was filmed in NYC?? Why? / Why not? Tell me about it.

I have seen so many movies that were filmed in NYC! For example Breakfast at Tiffany’s with Audrey Hepburn, King Kong, Wolf of Wall Street, Elf. Or some of the tv shows like Sex and the City, Friends, Gossip Girl, or How I Met Your Mother.

3. What do you think is the most popular place for tourists in NYC? Tell me about it.

I think that the most popular place for tourists is the Empire State Building. It is something that symbolizes New York and you always think of it when you think of NYC.

4. If you travelled to New York City, which place would you definitely want to visit? Why? Tell me about it.

It is so hard to pick only one. But I would love to see the Central Park. There is so much to do and even though NYC is the most populated city with skyscrapers, it is nice to have a little getaway from the rush and noise.

5. Have you ever thought of finding a job in New York City? Why? / Why not?

I have always wanted to visit NYC, but I wouldn’t like to work there. I mean the money would be probably great if I’d find a good job. But if I would work there, I would also have to live there, and I don’t want that. I just love the mountains and nature too much to live in such a huge city that never sleeps.