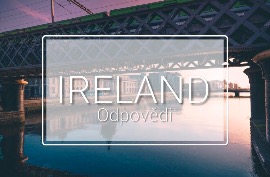 1. Where is Ireland located? Tell me about it.

Ireland is an island in the Atlantic Ocean. It is situated in the north-west of Europe, separated from Great Britain by the Irish sea. Ireland belongs to the British Isles and it is the second-largest one.

2. What is the climate of Ireland? Tell me about it.

Ireland’s climate is influenced by the Atlantic Ocean and the Gulf Stream. It is mild, moist and very changeable. It rains a lot, which is good for growing grass. That’s the reason Ireland is also known as the Green Island or the Emerald Isle. Temperature extremes are rare. The average summer temperature is between 15°C-20°C and around 5°C-8°C in the winter.

3. How is Ireland divided? Tell me about it.

4. What is the political system of Ireland?

5. What are the symbols of Ireland? Tell me about them.

6. Who was Saint Patrick? What do you know about him?

Saint Patrick was a Christian missionary. It is believed that he is the one who brought Christianity to Ireland. It is assumed that he died on March 17th- that is why Saint Patrick’s day is celebrated on that day.

7. What is a leprechaun? Tell me about it.

Leprechaun is a type of fairy. They are usually described as bearded old men, dressed in green. Sometimes they also wear a big hat. Irish legends say, that if you find a leprechaun and catch him, you can exchange his freedom for his treasure. But you should be careful because leprechauns are supposed to be very tricky.

8. What is the capital of Ireland? Tell me about it.

The capital of Ireland is Dublin. It is also the largest city of Ireland. The city is divided between the Northside and the Southside by the Liffey river. There are many monuments that are hundreds of years old, such as Dublin Castle, which was founded in 1204. Dublin also has lots of green parks.

9. Which other cities are there in Ireland? Tell me about them.

10. What is the relationship between Ireland and the UK?

Ireland and the UK have a really close relationship. In history, there was a lot of conflicts between the two, but nowadays the governments enjoy a strong diplomatic relationship. The United Kingdom is the most important trading partner of Ireland, while Ireland takes the 5th place in British exports. Therefore they have a beneficial relationship.

11. Is the Irish language similar to English? Why? / Why not?

The Irish language is completely different than English. They belong to different language families. English is a Germanic language, while Irish is an ancient Celtic language. They have very little in common.

12. Which monument do you think is the most well-known in the world? Why? Tell me about it.

13. Which event from the Irish history do you think is the most important? Why?

One of the most important ones is definitely the partition of Ireland. It happened in May 1921. It was based on an act called the Government of Ireland Act, passed by the British Parliament. There was a conflict between Irish nationalists and unionists. The unionists wanted to remain part of the UK, while the nationalists wanted the independence from Great Britain.

14. Are there any products from Ireland that you use? Tell me about them.

15. Is there a national sport in Ireland? Tell me about it.

Hurling is a national sport of Ireland. It has been played for over 3000 years. There are two teams of 15 playing against each other. The players use a wooden stick, called a hurley. They hit a small ball, trying to get it down the field. It is considered to be the fastest game on grass, and the world’s most skillful game.

16. Are there any winter sports? Tell me about them.

Gaelic football is the most famous sport in Ireland. It is played by two teams of 15. They play with a round ball, using both hands and feet. It is a combination of football and rugby. The goal is to get the ball through or over the goals. Pella is an indoor version of Gaelic football.
They also have an Irish ice hockey team, as well as biathlon, cross country skiing, and alpine skiing.

17. Do you think Ireland is a multicultural country? Why? / Why not?

Ireland is a multicultural country. Immigrants come to Ireland mostly for economic reasons. Because of the EU aid, many foreign people come to Ireland either to work or to study.

18. What makes a full Irish breakfast?

A full Irish breakfast includes bacon, eggs, sausages, mushrooms, baked beans, grilled tomatoes, and hash browns. It is served with a toast, butter, and a tea.

19. Are there any famous Irish artists? Who?

20. What comes to your mind when you hear the word Ireland?

I don’t think I would like to live in Ireland permanently, but I would be okay with living there for a year or so. I would like to get to know the people and Irish culture. Also, the nature is breath-taking there.

2. What places would you like to visit in Ireland? Why?

I like that there is a little bit of everything in Ireland. There are big cities, small towns, breath-taking nature, festivals, the coast with cliffs, history. Each of us can find something they like in Ireland.

4. Have you ever heard Irish? Do you know any Irish words?

I have heard Irish before and it doesn’t sound like English at all. I don’t know a lot of Irish, I just know that “snog” means nice.

5. If you travelled to Ireland, which means of transport would you choose? Why?

I think I would probably take the bus everywhere. It is the easiest and the cheapest way to travel around. There is either a tour bus in Dublin and other big cities, as well as other buses that can take me around the whole island.