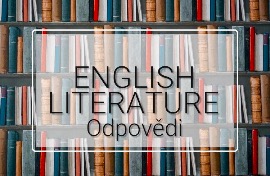 1. How can be English literature divided? Tell me about it.

2. What influenced the oldest English literature? Tell me about it.

There are many factors that influenced the oldest English literature. The most common ones are magic, religion, traditions, moral values, and problems of life. The language was influenced by Celtic language.

3. Which author comes to your mind when you think of English literature? Tell me about him/her.

The symbol of English literature is William Shakespeare. He was an English playwright and poet, born in the 16th century. He wrote 38 plays, most of them are still famous today. Some of his best plays are Romeo and Juliet, Hamlet, Macbeth, Othello, and King Lear.

4. Who wrote Oliver Twist? What is it about? Tell me about it.

Oliver Twist is novel by Charles Dickens. The book follows the journey of a little boy Oliver, who is an orphan. He is sold to a funeral director, but he runs away and joins a group of thieves (children), led by a man called Fagin. Oliver ends up being rescued by a wealthy man and lives a happy life.

5. What was typical of the modern English literature? Tell me about it.

6. What was the literature like, during the Victorian era? Tell me about it.

7. Who were the Angry Young Men? Tell me about it.

The Angry Young Men were a group of writers who hated the social system. This group emerged in the second half of the 20th century. Their books were full of anger and protest. To this group belong John Wain, Kingsley Amis, and John Osborne.

8. Do you know any English poets? Tell me about them.

There are many English poets that are known around the world. The most famous ones are Rudyard Kipling, Emily Brontë, Oscar Wild, and of course, William Shakespeare.

9. Who is the author of Utopia? Tell me about it.

Utopia is socio-political satire by Thomas More. It was published in Latin, at the beginning of the 16th century. T. More imagines a perfect nation living on an island in peace. A “utopia” is now used as a word describing a perfect imaginary world.

10. Do you know any English authors who wrote books for children? Tell me about it.

Yes, I know some. There is Roald Dahl, who wrote Charlie and the Chocolate Factory. Then C.S. Lewis, who wrote The Chronicles of Narnia. And then, for example, Beatrix Potter, who wrote Peter Rabbit.

1. Do you know any modern English writers?

Probably the most famous one is J.K. Rowling, the author of the Harry Potter series. Very famous is also John Green, who wrote The Fault in Our Stars or Looking for Alaska.

2. What genre of books do you like the most?

I really like sci-fi and thriller books. Those are the ones that won’t let you go to bed unless you read the whole thing. They are exciting, dramatic, and suspenseful. I love when you just can’t stop reading and you are living the story.

3. Have you ever seen any of the English plays?

I have seen Romeo and Juliet, but only as a movie. If I ever go to London, I would like to visit the Globe Theatre and see one of Shakespeare’s plays there.

4. Have you ever watched a movie based on English literature?

Yes, I have seen many movies based on English literature. For example Harry Potter series (J.K. Rowling), A Christmas Carol (Charles Dickens), The Lord of the Rings (J.R.R. Tolkien), The Chronicles of Narnia (C.S. Lewis), and Pride and Prejudice (Jane Austen).

5. Have you ever read a book by Shakespeare?

Yes, I have read Romeo and Juliet, Macbeth, and Othello. I had to read those for school. They are pretty difficult to read and understand because of the old language.