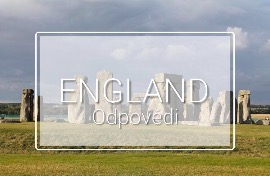 1. Where is England situated? Tell me about it.

England is a part of the United Kingdom, therefore it is located in the north-west of Europe. There is Scotland to the north and Wales to the west. The English Channel and the North Sea separate England from continental Europe.

2. Is England an independent state? Why? / Why not? Tell me about it.

England is not an independent state. It is a part of the United Kingdom of Great Britain and Northern Ireland. There are eight criteria that decide whether a country is independent or not. England doesn’t meet 6 of those. For example, England doesn’t regulate the trade, the UK’s Parliament does it.

3. Which cities are there in England? Tell me about them.

4. How would you describe the typical Englishman? Tell me about it.

I imagine a typical Englishman as a tall man, wearing a tweed jacket and a hat, drinking tea and reading the Times. He talks with a strong British accent, sounding very posh. But those are all probably just stereotypes.

5. What are the symbols of England? Tell me about them.

6. Who is the head of England? Tell me about it.

The head of the state is Queen Elizabeth II., however, the prime minister is the one, who runs the country. The current prime minister is Theresa May. She is responsible for all the decisions of the British government.

7. Is England a multicultural country? Tell me about it.

England is definitely a multicultural country. People from all around the world come to England to study, or to work. More than 300 languages are spoken in London. More than 35% of London’s population are foreigners, making it the second largest immigrant population, right after New York City.

They are 3 of the 7 Anglo-Saxon kingdoms, they all unified into the Kingdom of England.

9. Which things do you imagine when someone says the word England? Why? Tell me about it.

10. What is a typical English meal? Tell me about it.

The most typical and famous English meal is fish and chips. It is a fried battered fish served with hot potato chips.

11. What is the weather like in England? Why? Tell me about it.

The weather in England is unpredictable. Because it is an island country, the weather is very changeable. The Atlantic Ocean and the Gulf Stream influence the weather the most. Summers are pretty hot, temperatures are between 25-30, while the temperatures in the winter are between 0-10. There is also a significant amount of rainfall, that’s why England is known as a rainy country.

12. What is the difference between “The English Channel“ and “Channel La Manche“? Please, explain.

13. What does the typical English coast look like? Tell me about it.

The coastline of England is very long and rugged. There are many cliffs, beaches, and bays. The cliffs offer a beautiful view of the ocean and the sea.

14. What kind of general relationship is there between the English people and the Scottish people? Why?

There have always been arguments between the English and the Scottish throughout the history. English people see the Scottish as villagers. Therefore they look down on them. Also, Scotland has always wanted to become independent, they even wanted to stay in the EU, but because of Brexit, they are forced to exit.

15. Which event from the English history do you think is the most important? Why?

There are numerous historical events that are important. Some of them would be for example the Act of Union, or the Battle of Waterloo. The Act of Union happened in 1707. The Scottish Parliament and the English Parliament united into One Kingdom. The Battle of Waterloo happened in 1815. It was a battle, where British-led allied armies with Prussian commands defeated Napoleon Bonaparte and his French army.

16. Is the English language same in all parts of England? Why? / Why not?

There are several different dialects in England. There is a Received Pronunciation, sometimes called “the Queen’s English”. Then there are Northern and Southern English, East and West Midlands, East Anglian and a West Country English. They are not different languages, just different dialects.

17. Which monument do you think is the most well-known in the world? Why? Tell me about it.

I think that the Buckingham Palace, Big Ben, and Stonehenge are the most well-known in the world.

18. Are there any places for doing winter sports in England? Why? / Why not?

There are several ski resorts in the Pennines and the Lake District in England. However, the highest mountain of England is only 978m above the sea level, therefore the skiing options are limited. There is also an indoor snow slope in Manchester. People can also enjoy ice skating, ice hockey, or curling.

19. Which sports can be considered national in England? Why?

Cricket is the national sport of England, although English people see football as their national sport. Cricket is played by two teams of 11. They play with a bat shaped like a paddle and a small ball. There is a wicket at each side of the pitch with two small sticks (bails) balanced on three stumps. The rules are similar to baseball. Football is the most popular sport in England. There are more than 90 professional clubs in the English Football League.

20. Which product of England do you use the most? Tell me about it.

1. Would you like to spend some time in England? Why? / Why not?

Yes, I would like to spend some time in England. I would either go there with Erasmus and study there or just visit England for a few days. There is a lot of history, art, cultural events, but also a lot of nature.

2. Which natural monument would you like to visit in England? Why?

I would like to visit the Durdle Door. It is a natural arch, standing vertically out of the sea. It is located in south-west England, in Dorset.

3. Can you imagine that the head of your country is a queen or a king? Why? / Why not?

I, personally, would like to have a king or a queen. I’ve always admired how the majority of British people love their queen. It unites the society, she is very careful in everything she does, never offends anyone, and there is a long tradition of the Royal family, so people feel safe and secure.

4. Which things would you take if you travelled to England? Why? Tell me about it.

I would definitely take an umbrella and a warm jacket, since the weather there is very unpredictable. Then I would take the basic stuff, like clothes, electronics, cameras, and money for sure, because I wouldn’t be able to pay there with Czech crowns.

5. What don’t you like about England? Why? Tell me about it.

I have never been to England, therefore I don’t know what I don’t like yet. But I’ve heard that the public transport is always overcrowded and expensive. And also that England is quite a dirty country, with garbage everywhere.